Ivan Padovec was the greatest Croatian virtuoso guitarist of his age, and the composer of some of the finest original songs for voice and guitar of the 19th-century. Both as a composer and as a virtuoso performer he reflected the emerging musical, social and cultural orientations of the Austro-Hungarian cultural center of Vienna during the Biedermeier period with its burgeoning Romanticism. (Click here for the link on the Sheva Collection ITALY for further information and to purchase the CD: Ivan Padovec: Works for Guitar and Soprano.)

Born into modest circumstances on 17th July 1800 in Varazdin, Padovec was one of nine children (five surviving childhood). Sensitive by nature and delicate in health, Ivan exhibited at a young age the eye problems that would plague him throughout his life. Moreover, an accident at the age of 10 during games-playing resulted in permanent blindness of the left eye.

Initially destined for a career as a teacher, Ivan was given a violin in 1817 by an uncle so that he could fulfill the ‘musical studies’ requirement for securing an academic position. Thanks to a natural aptitude and marked affinity, he quickly made music the primary objective and focus of his life.

Padovec’s earliest exposure to the guitar is unknown, but in 1818 he had the occasion to hear a concert by Mauro Giuliani — the greatest guitar virtuoso of his age — while visiting his uncle in Austria. Much as Franz Liszt’s life had been transformed upon hearing the transcendental feats of Niccolo Paganini, Padovec’s epiphany upon hearing Giuliani’s extraordinary performance led to his musical life henceforth being devoted to the guitar.

His diligence as a guitar student quickly bore fruit, and by 1819 he was able to support himself as a guitar teacher. Steadily developing a reputation as a virtuoso, Padovec in addition aspired to compose. (At this period the division between the performer and the composer was not clear-cut — all performers composed to some extent.) Ivan deemed his theoretical knowledge inadequate, and sought tutelage from the esteemed choirmaster Juraj Wisner Morgenstern (1783-1855).

By 1824, with his theoretical skills well honed, Padovec began his concert career in earnest. In 1827 he toured throughout Croatia (Rijeka, Trieste, Zadar, Zagreb, Varazdin, etc.), and, in addition, founded the Zagreb Philiharmonic Society (in conjunction with his teacher Morgenstern, who acted as its director). In 1829 a landmark concert at Vienna’s famous “Theater an der Wein” firmly established his international reputation, and he took up residence in the city.

Soon his music was being issued by the most renowned Austrian publishers (Diabelli, Haslinger, Werner, Witzendorf, Pennauer) and he found himself giving music lessons to pupils from the wealthy, educated, and aristocratic families of Vienna. International tours brought him to many of the major cities of Europe: London, Prague, Hamburg, Frankfurt, Pest, Brno, etc. In 1837, after a successful tour of Poland, and with a tour of Russia in prospect, Padovec’s always problematic eyesight failed him, and he was forced to abandon the tour. He sought medical attention in Vienna — but to no avail. He returned to his native Varazdin, where he resided for the remainder of his life.

By 1840, having made a partial recovery, he returned to teaching, and performing in neighboring cities. The Zagreb magazine Danica Ilirska reported his undiminished powers in a review of his concert on 18 January, 1840: “Our particular attention was drawn by our countryman Mr. Padovec, the composer and the exquisite guitar virtuoso, who wasn’t deprived of praise by even the severest critics in Vienna. This is another proof that our people are specially talented for music. Mr. Padovec gave two concerts in the city theater, showing to those who have musical knowledge that, concerning his tenderness and skillful use of that difficult instrument, he has already reached such a high peak, which hardly anyone could manage to surpass. All music pieces which he played had a great success, but best were his own variations on the national song ’Nek se hrusti saka mall.’ We also have to mention that in these concerts our first theater baritone, Mr. Bielcicki, sang two songs in Croatian (with text) by Ljudevit Vukotinovic: ‘Moje jutro’ and ‘Poziv,’ on which Mr. Padovec composed characteristic music, and that both songs made people so pleased that he had to repeat them a second time.” In 1842, Danica Ilirska again reported on Padovec’s concert performance — with special emphasis on the introduction of his newly invented ten-string guitar: “At the Padovec concert the hall was totally crowded with the audience, and general applause after each piece was vivacious. We have the habit of coming to all Padovec concerts, because besides his mastery — which is well known, he is our countryman and for many years has been suffering from bad sight. Mr. Padovec, organizer of the event, played on his newly invented ten-string guitar two pieces with such a rare liveliness and with real perfection. He was praised with great applause.” At the height of his powers, total blindness overcame Padovec in 1848. Forced to lessen—but not curtail—his activities, he created new pieces with the aid of a student or musical colleague acting as amanuensis. His compositions were submitted in 1856 to the famous competition in Brussels for new works and instrument building, organized by the Russian guitarist, nobleman, and patron Nikolai Petrovic Makarov.

In 1869, Padovec’s friend and biographer F. K. Kuhac found him still playing and teaching, and surrounded by an entourage of students and colleagues. The Croatian Parliament awarded him an annual life-pension of 600 forints in 1870-71. His final concert was given on 2 April, 1873 at the old Varazdin theater (the “Redouten-Saal”), wherein Padovec was listed as “Guitarist and Composer of Croatian Songs” — hence confirming his eminence in that field. Padovec died on 4 November, 1873, unmarried and leaving no children. His obituary in the Varazdin newspaper Pucki prijatelj read: Ivan Padovec, renowned and world-known guitar virtuoso, our excellent Croatioan composer, died on the 4th of this month in Varazdin in his 73rd year, and was buried on the 5th in the Florian cemetery. Although blind for many years, he composed until his last hours, working on the third volume of his Vilini glass (Fairy voices) songs. Let him rest in peace!’ Several years later a monument featuring a lyre was erected at his grave, which bears the following inscription:

Although Ivan Padovec first came to prominence as a virtuoso guitarist and as an author of solo works for his chosen instrument, his gift for melodic invention, along with his ability to integrate the guitar’s sound world into equal partnering with the voice, allows us today to recognise his marked pre-eminence as a song composer among the 19th century’s virtuoso guitarist-composers. His known output in this field numbers thirty songs — the complete set of eight with Croatian texts being the basis of this recording.

Padovec’s vocal compositions began to appear at around the mid-point of his career, the Three Songs Op. 43 being printed in late 1837 or early 1838 (and documented to have been performed in Varazdin on 4 January, 1838). The songs with opus numbers were published in Vienna, Zagreb, or Varazdin by various publishers (Diabelli, Werner & Comp., etc.). The composer’s highest opus number is reached with a vocal piece (Lahku noc, op. 74), confirming the composer’s abiding interest in this genre to the end of his career. (By comparison, op. 61 is the highest known amongst the concert works for solo guitar.)

Padovec’s vocal style may be seen as part of the tradition of romantic Classicism and the genre of “Hausmusik”. As with many of Schubert’s lieder (which might equally well fall under these categorizations), Padovec has chosen to express some of his most intimate and finest thoughts through the medium of song. A master of melodic invention in a multitude of moods, Padovec imbues his vocal miniatures with spontaneous lyricism—poignant, joyous, martial, nostalgic, etc. Formally, Padovec responded to the song texts in three-part, strophic, or varied strophic form. He gave the guitar consistent roles in both establishing the song’s mood (during the introductions) and by commenting upon the text (during the interludes and postludes).

This recording features Padovec’s two masterful variation sets on one of Schubert’s most famous pieces, the ‘Trauerwalzer’ D. 635, Op. 9, No.2 (from 36 Original Dances). Although the origins of its name are not known, the tune (and its title) became known to virtually all of Vienna by the early 1820s. Musicological sources usually date it to 1816, when Schubert was 19 years old. The waltz quickly proved to be fecund source material for composers to write variation sets upon — two of the earliest being Viennese dance composer Johann Pensel (1820), and Carl Czerny (1821), the latter’s Op. 12.

Variation sets (usually upon operatic arias or Croatian folk melodies) were one of Padovec’s most consistently employed solo guitar compositional formats, along with the Free Fantasie (normally deriving from well known operas of the day). It is no surprise therefore that chose to set the Trauerwalzer. In fact he did so twice, once early, and once late in his career. 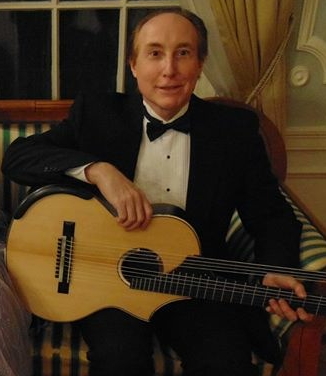 The early version (Op. 4), finds the waltz set in the bright key of A-Major, and has the theme’s figuration reduced to steady quarter-notes (as opposed to the original’s steady eighth-note figuration — hence implying a more rapid initial tempo). The composer’s youthful exuberance quickly takes off — and does not disappoint the listener. A series of five variations (based respectively on triplets, sixteenth notes, arpeggios, tonic minor key, and a duple-time return to the major) concludes with a virtuosic and rousing finale.

The later setting is for the 10-string guitar, and originates from the final section of the composer’s guitar method, the Theoretisch-practische Guitarrschule com ersten Elementar – Unterricht an bis sum Spiele diner zehnsaitgen Guitarre (1842), which was issued by the Viennese publisher Werner & Company. Padovec, along with J.K. Mertz, Johann Dubez and the majority of late Romantic virtuosi, employed the 10-string guitar as his preferred concert instrument. However, Padovec was the only one to leave a written method of how it should be played, and this variation set from the Guitarrschule is Padovec’s only extant composition for the 10-string guitar, his other published concert works being issued in versions for the standard 6-string instrument.

The setting in this version uses a highly resonant key for the guitar (especially in view of the additional bass strings): D major. The figuration retains the original’s steady eighth-note texture — implying a more leisurely initial tempo from a more mature composer. Four variations follow, based on triplets, sixteenth notes, the tonic minor key, and a highly ingratiating and tuneful Pollacca of extended proportions. The full range and sonic possibilities of Padovec’s 10-string guitar are freely exploited, and one can envisage from this work the deep musicality and stunning virtuosity which Padovec assuredly must have possessed as a performer.

Radio Show: “Classical Discoveries” at WPRB, Princeton — Interview with Princeton’s Premiere Classical Music Radio Host and Producer Marvin Rosen! Click HERE or the Links Below to listen to the Interview: